Wow. It just hit me how long I’ve been covering this space as a pseudo-journalist (an engineer who can spell and do grammar). It was a snowy January in Cleveland, many years ago… where ABB introduced us to the revolutionary System 800xA. Based on learnings from The Dow Chemical Company, the System 800xA was designed to be stateful and was a tremendous step forward in procedure controlled automation. Now ABB has announced…
ABB’s new release of System 800xA enhances security, supports upgrades on older platforms like Windows XP operating system
ABB introduces System 800xA version 6 at Hannover Fair; then takes it on the road with nine World Control Tour events on five continents
Zurich, Switzerland, April 8th, 2014 – ABB, the global power and automation technology group, has announced version 6 of its flagship distributed control system (DCS), System 800xA. 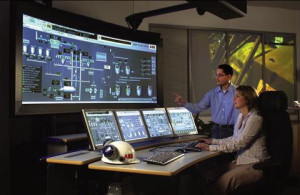 System 800xA is known for delivering productivity through consolidating process, electrical, safety, and telecoms in one system and providing the ultimate high performance operator control room environment featuring the Extended Operator Workplace. This sixth generation release, commonly called 800xA v6, is not only for new projects but has been specially developed to support upgrades of older DCS systems running on unsupported platforms such as Microsoft XP operating system. 800xA v6 provides customers with a more secure automation environment that lowers the total cost of ownership, while providing countless opportunities to improve productivity.
Protection against cyber threats
800xA v6 will add to an already impressive list of leading security features such as Advanced Access Control, White Listing, and means to monitor and manage the control system’s security integrity:
· Use of the latest operating system Windows MS 8.1 / Server 2012 R2
· Improved system installation that automatically sets policies simplifying system hardening
· Digital Code Signing to ensure software legitimacy code
· Faster, more immediate access to approved anti-virus files
Lower cost of ownership
“Advances in technology have allowed for some amazing changes in how automation systems are deployed compared to five years ago,” says Extended Automation Product Group manager Jonas Brannvall. “In addition to virtualization of the entire 800xA system, performance has been optimized to the point where we can significantly reduce the infrastructure needed for our users when upgrading from previous releases.” Jonas went on to say that in some cases automation system owners will see a 50 percent reduction in footprint leading to reduced capital and lifecycle costs.
Removing the barriers
Special consideration has been given to ensure a significantly improved upgrade experience supported by an enhanced Sentinel customer care program. “Upgrading installed systems requires planning and testing” says Mats Pettersson, Head of 800xA Product Management, “that is why we’ve concentrated on tools and services to make the transitions easier and faster.” 800xA v6 includes:
· More intelligent installation and upgrade tools that reduce manual steps by over 80 percent
· A service called the “customer lab” that can be utilized to upgrade systems and allow for initial testing in a virtual environment reducing the required end-user manpower for upgrade testing and validation.
Reaching new heights of collaboration
“The most exciting part about upgrading is seeing what you can do with System 800xA v6” says Roy Tanner, Marketing Manager for 800xA. “System 800xA’s collaboration platform and its built in functionality allow you to tackle money saving initiatives and implement productivity enhancing solutions for a fraction of the cost of adding third party software and hardware. In addition to alarm management, advanced control, video systems, safety, electrical integration, power management, and a host of other embedded capabilities, System 800xA v6 adds:
· Wireless routers to its portfolio, enabling the safe and secure deployment of mobile operator clients, maintenance workplaces, and even process controllers.
· New ways to visualize, curate, and analyze data with the addition of the System 800xA Collaboration Table providing a 3D view of plant key performance indicators.
· A new information management platform enhancing secure connectivity to 800xA so that data can be safely gathered and used for mining and analysis.
· A list of operator effectiveness improvements including trend and alarm list enhancements, an embedded public address system, and a KNX interface that brings the operator’s environment into the overall solution.
* Windows is a registered trademark of Microsoft Corporation in the United States and other countries.
Time to celebrate!
The launch of 800xA v6 is an important milestone for ABB and its Control Technologies Business Unit, but most important to our customers. It marks the next level of ABB’s innovative quest to create a collaborative process automation environment that allows for the sharing of data without boundaries to generate productivity, efficiency, and safety improvements.
“As we look back upon the start of that journey more than 10 years ago, we realize how far we’ve come. With approximately 10,000 800xA systems installed in over 100 countries we’ve decided to celebrate our accomplishments and the release of 800xA v6 by embarking on a World Control Tour,” says Tanner.
The World Control Tour will start in the Spring of 2014 and will include 9 customer events around the globe. For more information on System 800xA and the World Control Tour, visit http//:www.abb.com/800xA.