“We’re past the inflection point, where there are now more things connected to the Internet than people,” Rockwell chief executive Keith Nosbusch said in a keynote speech in Barcelona in late October 2013 at the first Internet of Things World Forum.
The Internet of Things will be defined by the exponential growth of web-enabled “things” that measure, monitor and control the physical world, talking with each other more than they talk with humans. Among the many examples: thermostats, car keys, public toilets, lake levels, parking meters and parking spaces, refrigerators and televisions, subways and airports, automated teller machines, soil conditions for crops, and garbage cans that can say when they’re full.
But how will the Internet of Things interface with manufacturing? Rockwell’s John Bernaden is the vice chair of the Smart Manufacturing Leadership Coalition, which likely has an answer.
Manufacturing’s Future
Manufacturing needs a completely new metaphor. Right now, if you stand and look at a process or a discrete assembly line, what you see is control masquerading as worker replacements. That is, when it got too expensive to have a paid, experienced worker watching a gauge and turning a knob or valve, we put in a controller. Now we have groups of controllers, but essentially we are still automating the old human expertise and observation. Robots mimic human workers in discrete automation programs as well.
And as we did this, we “growed it like topsy.” Nothing easily talks to anything else. Even flavors of the same protocol sometimes don’t work together.
We have basically bumped up against the hard barrier of what the current manufacturing metaphor can do to optimize and make manufacturing more efficient and more cost effective…our only option has been to ship manufacturing offshore, which, itself, is bumping up against the ceiling that the former low cost of manufacturing countries aren’t low cost anymore.
The Hand of Government
“The Obama Administration is doing more than making “Mom, the Flag and Apple Pie” statements about the future of manufacturing. They are supplying funding too. Take a look at http://www.smartmanufacturingcoalition.org and talk to SMLC about what you need, and what SMLC can do for you,” said John Bernaden from Rockwell, SMLC’s vice chair.
SMLC has defined an excellent roadmap, and established two test beds for what we are calling the Smart Manufacturing Platform. The idea is that the platform can be vendor neutral and company neutral, and can be used like a substrate onto which applications can be bolted.
The metaphor is the app store and apps that Apple pioneered for the iPhone. “We are calling this the Smart Manufacturing Marketplace,” said Peggy Hewitt, an early supporter of SMLC, formerly of Honeywell, and now doing marketing for SMLC. Another metaphor would be like NESSI, the new sample system initiative I discussed in the Siemens Process Analytics article in the January issue of the Industrial Automation INSIDER.
“What SMLC doesn’t have yet is a lot of end users who want to pioneer more test beds. We need them. What SMLC DOES have is grants from the US Federal Government to produce these test beds,” said Jim Davis from UCLA, one of SMLC’s founders.
SMLC isn’t an academic think tank. Although many professional organizations are on the board, such as ASQ, ASME, ACEE, SME, along with universities such as UT Austin, Purdue, UCLA, NCSU and others, there are representatives from both automation vendor and automation end user companies. Corning, Alcoa, Praxair, General Mills, General Motors, General Dynamics and other end users attended along with representatives from Rockwell Automation, Emerson, Schneider Electric, Honeywell, and others. These companies are serious about creating a platform that would be vendor neutral, company neutral, and designed from the ground up as a secure platform for manufacturing.
Rockwell’s Sujeet Chand has forged a partnership with Cisco to bring the Internet of Things to manufacturing networks. 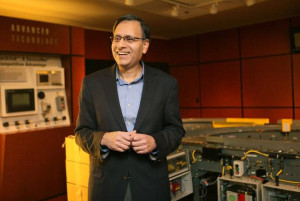 http://www.jsonline.com/business/rockwell-leading-way-in-next-industrial-revolution-b99174535z1-238731421.html
In a recent article,
http://www.denverpost.com/business/ci_24835531/internet-things-could-be-next-industrial-revolution?source=rss, the Denver Post warns of potential problems: “But not everyone is so sanguine. Besides the potential privacy and security implications of all these devices shuttling information about people and businesses across the Internet, another concern is what might happen if the machines fail to function properly.
“Warning of the potential for glitches, a study this year by the Oxford Internet Institute contemplated whimsically that someone might find themselves “repeatedly telephoned by a public lavatory that has run out of supplies and has been programmed with the wrong number to contact the supplier.”
And in a recent TED talk, Marco Annunziata, Chief Economist and Executive Director of Global Market Insight at General Electric Co, discussed the age of the Industrial Internet.
http://www.ted.com/talks/marco_annunziata_welcome_to_the_age_of_the_industrial_internet.html?utm_campaign=&utm_medium=on.ted.com-static&utm_content=awesm-publisher&awesm=on.ted.com_IndustrialInternet&utm_source=linkedin.com
Is this all going to happen? Probably sooner than you think. For example, two foundation technologies for the Manufacturing Internet of Things, virtualization and cloud computing, have been taken up by manufacturing companies far, far faster than anyone expected. Manufacturing is the last laggard to adopt new technologies, being at times twenty to thirty years behind the commercial sector. Not so, with virtualization and cloud computing. There’s been heavy adoption in Manufacturing and automation in just three to five years.